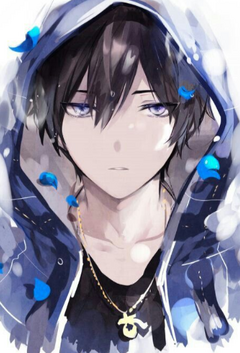 Zane is a tall (6'6) pale and skinny male with icy blue eyes and black hair. He wears a blueish black hoodie and jeans and a necklace that only he knows the true meaning of. At the moment, Zane is very wounded and can't fight as well as used too. He has bandages (large white medical bandages that is) on his arms, neck, and torso. He is a shapeshifter, but is most likely seen with wolf ears and a tail as he is mostly a werewolf. Zane also wears a black mask that covers his mouth and nose.

Oh yes! I love you already, a good pawn or knight for my game!!

So help me God, if you ever lay a land on my brother or Zeke to hurt them you'll be dead within a second.

Stop caring. You deserve to die. I don't care anymore and I will fucking end my life someday. You won't see me again.

I dunno what it is about you, but you always make me feel calm. I'm glad you don't hate me..

I'm glad Zeke saw through you and attacked, he should be a good pawn for the game of chess don't you think?

Get outta my head! I'm dying because of you, and you want this!

You saved us all but at what cost...?

I don't remember you, but a faint gleam burns for you.

dont see yourself on here? comment or message deadly høpe and theyll get you on as soon as possible !!

Attracted to (physical): zane has no perference in looks, but like taller and darker haired males.

Attracted to (mentally): Zane likes actors. When someone pretends to be rough and hard and tough but in reality their a complete softie, he finds it amusing. He likes it when someone makes him laugh/giggle, as only a few people can.

People attracted to him: Tyler, Darren

People he is attracted to: None

More info to be added
Retrieved from "https://trash-clan-roleplays.fandom.com/wiki/Zane?oldid=6725"
Community content is available under CC-BY-SA unless otherwise noted.